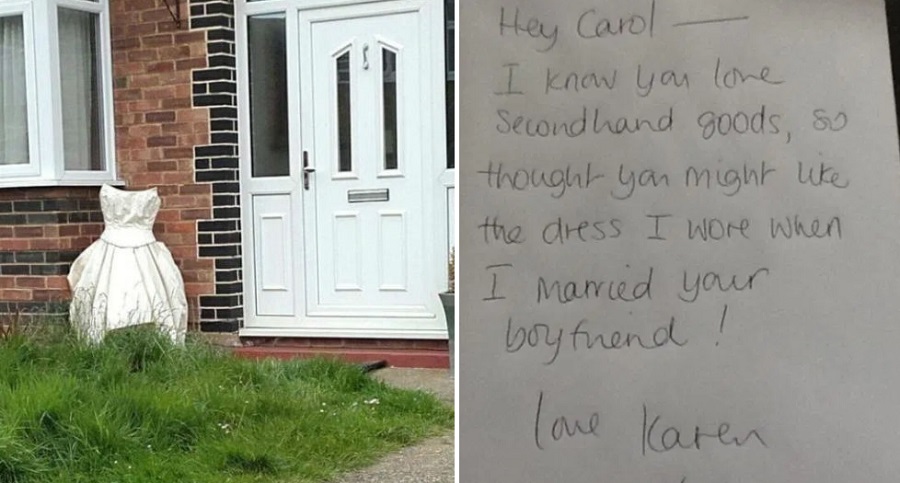 Going through a situation where your loving partner ends up having an affair with another person is very difficult, and it usually includes the initial rage, the disbelief, the trauma, and the depression.
Realizing that someone you love(d) and care(d) about has cheated on you is pretty harsh, and this 57-year-old woman from Essex, U.K., went through a similar experience when she found out that her husband cheated on her with her best friend. However, her response is pretty spectacular and absolutely noteworthy!

Karen Dineen was absolutely heartbroken when her husband Terry Lovell broke off their 19-year marriage by having an affair with her own best friend. Karen and Terry ended up getting divorced in 2015, and even though the pain was very hard to deal with, Karen didn’t just “let go” things. She made one last statement for the new pair, and it’s very creative.

As reported by Daily Mail, Karen decided to “donate” her wedding dress from her marriage with Terry, and she dropped it off with one very touching note over her ex-best friend’s porch. She wrote to her friend Carol that she knows she loves secondhand goods, so she thought she might like the dress when she married her boyfriend Terry.

She has since told Daily Mail that leaving the wedding dress and putting that note through the door seemed like a good idea because she knew there was nothing they could do. She was shaking like a kid at Christmas with excitement, as she’s got nothing to hide. Carol was a friend of her for 25 years, and he was her husband for 19 years.

To add to that, Karen even changed her last name to her maiden name, and we must admit that we like her “cheeky” revenge. But what do you think about it? Do you agree with what she did? Tell us in the comments.