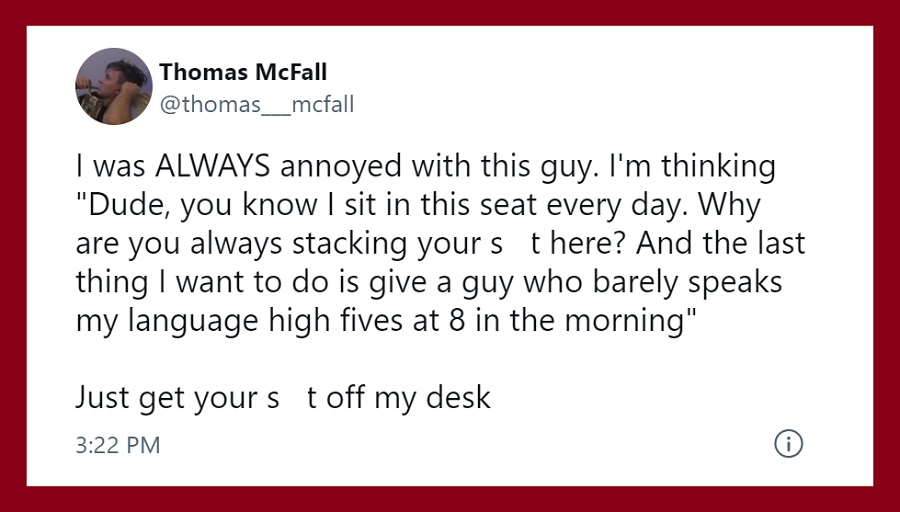 Remember that feeling when you walked into a classroom and see someone else has taken your desk?
I mean, you’ve been sitting at the same desk for ages and you assume everyone knows that – but it turns out, someone doesn’t.

You might get angry at first and even try to ‘fight’ for what’s yours, or at least tell the stranger to move their stuff. Or, accept the situation and find a new place to sit.

However, you’ve (probably) also learned that you shouldn’t judge a book by its cover – and the same goes for people. What do you know, maybe you have a lot more in common with this person than you think?

The following Twitter story is about a guy who learned this the hard way, and it goes a long way in acceptance and being open to new people – maybe you’ll make yourself a new friend along the way.

So in one of my Management classes I sit in the same seat in the front every day. Every single day I sit there.

Now, I also sit next to some foreign guy that

barely speaks English. The most advanced thing I’ve heard this guy say in English is “Wow, my muffin is really good”.

This guy also has a habit of stacking every item he owns in the exact space I sit. His bag, his food, his books, and his phone are ALWAYS right on my desk space.

I was ALWAYS annoyed with this guy. I’m thinking “Dude, you know I sit in this seat every day. Why are you always stacking your shit here? And the last thing I want to do is give a guy who barely speaks my language high fives at 8 in the morning”

Just get your shit off my desk

As I’m standing there on my phone another guy who was also late walks into the class before me and tried to take my seat since it’s closest to the door.

The guy sitting next to me stops this dude from sitting down and says “I’m sorry. My good friend Thomas sits here.”

I ended up going into class and of course he cleared the seat and said “Ah, Tom. You here. Okay.” And I did get a high five.

At the end of class I ended up asking him if he wanted to get a bite to eat with me. We did. And we talked for a while. I got through the broken English

I asked him how he liked America as well. He said he misses his family but it’s exciting to be here. He also said “Not every American is nice to me like you are, Tom.”

I bought lunch, of course. Dude deserves it. He gave me a high five for buying lunch. Gotta keep up tradition.

Moral of the story? Don’t do what I do and constantly only think about yourself. It took me nearly the entire semester to get my head out of my ass and realize this guy was just trying to be my friend. Better late than never I suppose.

Moral of the story? It’s rather easy to misinterpret the actions of others sometimes, but you really shouldn’t judge a book by its cover. Most people seem to agree, as the post has since been liked over 400k times – and for a good reason!

Woman Won’t Get a Raise Because Her Husband Has a Good Salary
Single Dad Cuts Of 7-Year-Old Daughter’s Hair, Asks If He Did Wrong
Comments
Comments