This Is What Living in Matriarchy Would Look Like For Men

This Is What Living in Matriarchy Would Look Like For Men 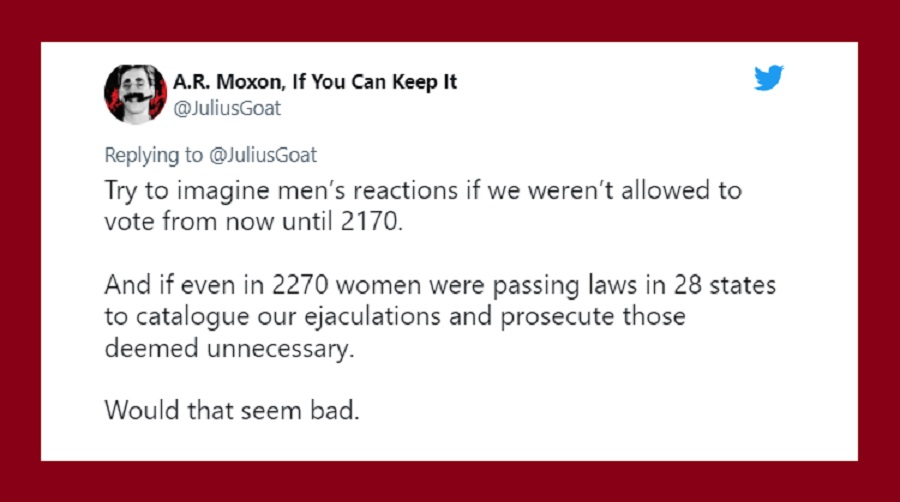 Even though we entered 2022, gender is still a massive issue, and there are many societal flaws that need to be eradicated.
A.R. Moxon is a male writer and Twitter user who is determined to demonstrate just how overdue we’re when it comes to gender equality, and he showed what the world would look like if were living in matriarchy rather than patriarchy. He just changed the gender roles, and voila: everything’s different. But just how different? Check out his Twitter thread and see what we’re talking about.

Try to imagine men’s reactions, were it known that of the next 113 SCOTUS justices, only 4 would be men, and none of those w/b appointed before 2205, and even then women’s complaints about male appointees would be “why don’t they just appoint the person best qualified?”

Try to imagine men’s reactions if we weren’t allowed to vote from now until 2170.

And if even in 2270 women were passing laws in 28 states to catalogue our ejaculations and prosecute those deemed unnecessary.

Would that seem bad.

What if we men knew there wouldn’t be a male candidate for the presidency for 240 years, and even then he’d lose to the 2260 version of Roseanne Barr, who’d been taped bragging about assaulting men during the campaign—but the media talked about what a scary time it was for women?

I know, these are crazy hypotheticals.

Insane. It would never happen. It would be insane to treat a gender that way.

But if it did, wouldn’t it matter?

We’d need to rethink everything.

A key point. You can play this exercise for many different types of people People of color. Women of color. Gay people. Trans people. Native people. Muslims. Jews. Atheists. Disabled people. And more.

I’m trying to leverage the instinct in men—societally instilled and encouraged—to center everything around us.

We have trouble hearing women it seems.

So I’m centering us in a completely different story, one in which we’ve been treated throughout US history as women have been.

As for revenge on men … well, that *is* a danger of insisting on a world where domination is the rubric.

Eventually 50% of the population, tired of their demands for equality going deliberately unheard, may agree to the terms men have set.

Man Tells Wife His Job Is Harder Even Though She Works More Hours, Asks If He’s Wrong
Man Weight-Shames Girlfriend In Restaurant Then Eats Her Food
Comments
Comments